Start Point: Hartford Traffic Lights
Distance: 7.2 miles
Paths: A combination of pavement, quiet road and well defined country park tracks
Waymarks: The path through the country park is generally well marked with signs and maps.
Observations: A detailed map of the Anderton area is available from the Northwich Community Woodlands site - Whilst this is shown as a circular walk it is also possible to do variations on the theme from the Anderton Boat lift car park.
Map: Ordnance Survey Explorer 267 and as above.

This circular walk combines both a visit to one of the North West’s best known industrial heritage sites, the Anderton Boat lift – the “Cathedral of the Canals”; a stroll through Anderton Country Park along the river Weaver (with diversions to the bird watching hide on Haydn’s pond); before coming into Northwich via Marbury Lane, and returning to Hartford via Castle (seeing the evidence of the local Roman occupation). 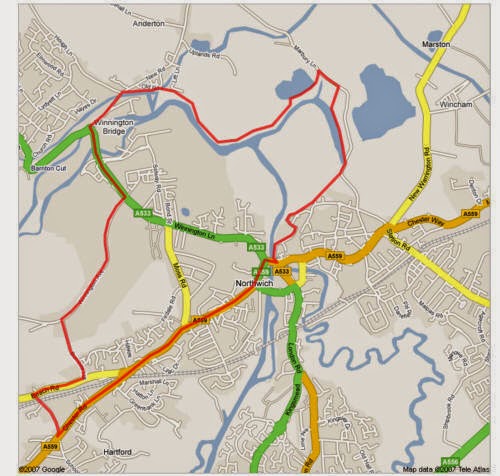 ● Start from the traffic lights and go to the end of Bradburns Lane before turning right onto Beach Road.
● Turn left down Burrows Hill and walk to the bottom before turning right on to Winnington Avenue. (Take care there is no pavement after Firdale Road).
● Walk to the end of Winnington Avenue before turning left onto Winnington Lane and crossing the two bridges over the River Weaver.
● At the T junction traffic lights turn right and walk up the increasingly step Scoot Hill towards Marbury.
● As you commence the walk up this hill the Trent and Mersey Canal is on your left above you.
● Just before the turn left towards Barnton you will come to the point where the canal crosses under the road.
● Take the track along the side of the canal to reach the Anderton Boat Lift visitors centre. Distance from Hartford to the Boat Lift is 4 km (2.5 miles). If you are in need of refreshments at this point there is either the café within the visitors centre or, if you cross the bridge opposite the top basin of boat lift, you will find the Stanley Arms which does food and has a large beer garden.
● Having visited the boat lift and the exhibition walk up to the main car park area and take the path on the far side of the car park down towards the banks of the River Weaver, entering the Anderton Nature Park. (Signposted Wildflower Trail – Dragonfly Pond - Carey Park)
● As you descend the hill it is worth taking the slight detour on the left to visit the Dragonfly pond. This pond is home to many damselflies and dragonflies because the water is too salty for the fish and frogs which would normally feed on their young.
● Continue on the path by the side of the river for 750 metres (about half a mile) and just after the river splits you will come to the Carden’s Ferry Bridge (this is a short cut on the route to Northwich – or it can be used on the way back as a circular walk back to the boat lift)
● Ignoring the bridge, continue along the Weaver for another 0.5 Km (third of a mile), before ascending a flight of wooden steps on your left which will take you up to the edge of Haydn’s Pool
● At the top of the steps turn right and follow the pool along to the bird hide at the far end which has an informative display of the species you may see.
● After leaving the bird hide come down some steps on your right onto a track that leads onto Marbury Lane following signs to Witton Mill Meadow.
● Turn right onto Marbury Lane and, immediately after crossing Butterfinch Bridge, take a path on your right signed towards Witton Mill.
● Follow the path through the woods and onto the banks of the river which will lead you into Witton Mill Meadows Car Park.
● Exit the car park and turn right onto Marbury Lane, crossing Witton Mill Bridge in about 100m.
● After crossing the bridge take the path on your right signposted Carey Park – Northwich Town Centre.
● The path now passes to the rear of the Civic Amenity site (Council Recycling Centre).
● At the rear gates of the recycling centre keep right and then take the left fork of the path. After a few hundred metres you will come to another fork in the path where on your left you will see the Northwich entrance archway to Carey’s Park.
● Exit through the arch and you will find yourself at the bottom end of the Matalan Car Park.
● Cross the road and go along Leicester Street to come out at Marks and Spencer. Distance from the boat lift to this point is 4.3Km (2.7 miles)
● Return to Hartford via Castle where you will see a number of information plaques relating to the Roman occupation of the area by the end of the wall beneath the Methodist Church and next to the Art shop. Distance from Marks and Spencer to Hartford is about 3.2 km (2 miles). N.B. Instead of returning via Northwich it is possible to do a circular walk through the Nature Park back to the boat lift. Instead of exiting under the arch in Northwich carry on the path (signposted Carden’s Ferry Bridge) to get back over the Weaver

A structure of elegant simplicity, the Anderton Boat Lift is considered by many to be one of the great engineering feats of the 19th century. Designed by Edwin Clarke and constructed in 1875 the lift was the first of its kind in the world and a major engineering achievement, utilising a hydraulic lift system to raise and lower barges and canal boats the 50ft difference in height between the River weaver to the Trent and Mersey Canal. The lift was restored to full working order in 2002, and now provides visitors with a unique experience. Boat trips can be booked at the Visitor Centre which also contains an interactive exhibition, a café, children’s play area and shop. More details can be found at www.andertonboatlift.co.uk

The Romans at Castle

Excavations at Castle revealed traces of timber barrack buildings and a surrounding defensive ditch with a turf rampart faced with timber. In the period between the military occupations, around 100 AD, native civilians occupied the military site, undertaking a variety of industrial processes. A kiln was operated by a potter who stamped his name Maco on his wares. Several furnaces and smithing hearths were found which were used for shaping iron, and a damaged iron auxiliary helmet was buried with cheek pieces from two other helmets, suggesting it awaited repair - this is similar to an armourer's chest, buried at Chester.

Anderton Nature Park is about a hundred acres and is transformed from industrial wasteland and was one of the first areas of the Northwich Community Woodlands to be reclaimed. Many of the areas around Northwich are legacies of the old salt and soda ash industries, with disused lime beds and shallow pools created by subsidence. During the 1900s liquid, lime-rich waste was created by the local soda industry. Large areas of land were enclosed with ash clinker walls and filled with waste which gradually solidified. Toady the salt, lime, ash and clinker all create different conditions which allow some unusual plants to thrive. The park is a haven for wildlife, in particular wild flowers, which can be discovered by following the Wildflower Trail (leaflets available, in season, from the Rangers' Office and the Boat Lift Operation Centre). Anderton Nature Park. Two-thirds of it was Witton Flashes, one of the huge areas of ground which collapsed as a result of salt mining and wild brine pumping. Today Witton Flashes have become Haydn’s Pool, Marshall’s Wood and Witton Mill Meadows The other third of the Park was covered by the known salt works where white salt was boiled out of brine in huge iron salt pans. Further details can be obtained from http://www.andertonstory.org.uk/main.html