PLEASE NOTE - Some people have had difficulties following these directions. There seem to be some issues with the footpath signs. We are looking into this. In the meantime it may be better if you avoid this walk until we are able to give you a positive update.

Thorn Wood is owned by the Woodland Trust and the public are welcome to walk there at any time - it is a valuable local facility and popular with people wishing to take their dogs for a good walk away from public roads. 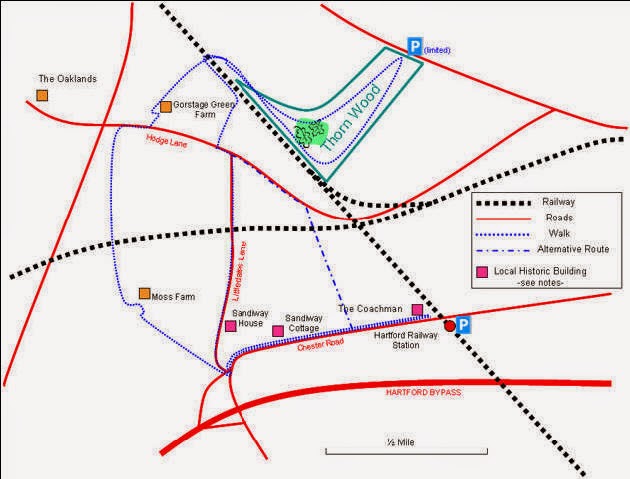 ● From The Coachman Public House (see notes) walk along Chester Road away from the village centre until you reach a sharp left bend in the road. Turn right here and immediately right again into Littledales Lane. You will pass Sandiway Cottage on your right just before the end of the speed restrictions (see notes).
● Opposite you, you will see a stile and a footpath sign leading across a grass field.
● Cross the field to a stile half way along the opposite side and then go diagonally across the next field to another stile, followed immediately by another. There is a good view of the Sand Quarry from this point.
● Go down the hill and through a gate in a short stretch of wooden fence, continuing down hill through gorse bushes and bearing right to approach a stile next to a metal field gate. This section of the walk goes through a cattle field and can be very muddy in wet weather.
● The next stile is visible to your left where the path meets a public bridleway that runs between Littledales Lane and Sandiway.
● Cross the stile and head directly towards the railway embankment where there are steps leading to an open crossing. Take great care when crossing the line and descend the steps on the opposite side.
● Cross a stile and turn immediately left to cross another and turn right.
● Walk towards the stile in the opposite side of the field, crossing a bridge over a stream about half way across.
● Cross the stile and continue on the same line to yet another stile and planks over a muddy field edge.
● Follow the right hand hedge to reach a stile and then the left hand edge of the next field towards some houses and the road (Hodge Lane).
● Turn right on the road and after 100 yards turn left into the driveway to a farm.
● Follow the drive into the farm yard and turn left in front of a cattle shed.
● Turn right through a metal gate alongside the cattle shed.
● Keep the field hedge on your right and follow it up to a metal bridge over the main railway line.
● Cross the bridge and turn right, following a track parallel to the railway for approximately 200 yards (there are two –if you take the one nearest the railway you will need to cut through to the other where this ends –they are only a few yards apart).
● You will come to the edge of Thorn Wood which is accessible through a pedestrian opening in the surrounding wooden fencing.
● There are numerous paths through the extensive woodland.
● To return retrace your steps until you have crossed the metal bridge over the railway but then take the leftmost of the two stiles and turn left to walk parallel to the railway.
● This will lead to a gate at the end of the field. Go through this and turn right to follow the field edge all the way up to the road (Hodge Lane).
● Turn left along Hodge Lane and then right into Littledales Lane. At the top of the lane look out for Sandiway House on the left (see notes).
● Alternatively continue down Hodge Lane until you see a footpath sign on the right—go through the tunnel under the railway , cross a small field and then follow the line of the electricity pylons across a field to emerge at the bottom of Eaton Place and so onto Chester Road.
● This will bring you back to Chester Road and to your start point.

This 19th century Inn no doubt owes its existence to the opening of the Grand Junction Railway in 1837 that connected Liverpool to Birmingham. It was originally a beerhouse (not licenced to sell spirits) and was called the Hartford Station Inn and became the Railway Inn in 1891, The Station Hotel in 1903, and at some point The Railway Hotel. It was renamed The Coachman in 1971. This “new” name did reflect the hostelry's past as it stood on the Chester Turnpike and would have been a coaching stop for people wishing to use the railway. At one time it had extensive stables and horses and coaches could be hired to complete a journey beyond the reach of the railway. It was a free house until 1926.
If you ever wondered why mainline trains used to stop at Hartford Station (sadly no more) it was because the Chairman of the Grand Junction Railway lived in Hartford and it was his wish that all trains should stop here in case he wanted to use them. This legacy survived nationalisation of the railways and continued to the early 2000s.

This is the beautiful half-timbered house on the right of Chester Road as you walk away from the village centre, just before you reach the end of the speed restrictions. It is noted for the glorious display of spring flowers amongst the trees that surround the property. It is one of the oldest surviving buildings in the village, adding a tremendous amount of character to the area. It was originally built around 1780 and was probably a hunting lodge for an owner who wished to ride with the Cheshire Forest Hunt - however, this is not certain.

As you return along Littledales Lane you will pass the entrance to Sandiway House just before the lane narrows to become a single track. The original entrance was off Chester Road and you pass the old Lodge House at the entrance to the modern Sandiway Park estate that was built in the former grounds of the house. Mr John Bolton Littledale was a wealthy Cheshire businessman who lived at the then Sandiway Bank (now Sandiway House).
In 1881 this house was part of Weaverham cum Milton rather than its present day incorporation into Hartford and the house and lodge were much more isolated. At the time of the 1881 census his family of five people employed seven servants. There was a striking difference between John's age and that of his wife - 23 years! He died in 1889 at the age of 66 and is buried in Hartford churchyard where a window at the west end of the church was given by his friends and dedicated to his memory. He also gave his name to Littledales Lane and to a small wood close to the walk called Littledales Covert (he was a keen huntsman with the Cheshire Hunt that met at the Bluecap and had it’s kennels nearby).

The House was subsequently owned by Sir John Brunner Bt who was MP for Northwich from 1910 to 1918 - he was the son of the founder of Brunner Mond, a major local employer and one of the companies that merged to become ICI. It was then empty for some time before being used as the Mid Cheshire Electricity Board headquarters, then by Leonard Fairclough (builders), offices for AMEC plc and it is presently a private house again with many of the modern office extensions having been demolished.


Thorn Wood is a 41 acre new woodland between the villages of Weaverham and Hartford but wholly located within Hartford Parish. The site is a Community Woodland with part of it planted as part of the Woodland Trust’s Millennium project "Woods on Your Doorstep" . The land was purchased in March 1998 with the help of The Mersey Forest, The Countryside Agency, the Forestry Commission, the Millennium Commission, the County, District and two Local Parish Councils, the Sainsbury Family Charitable Trust and numerous local business and private donations.
Formerly pasture, the site was opened to the public during the winter of 1998-99 and planted as new native woodland comprising a mixture of approximately twenty six thousand oak, ash, silver birch, rowan, and wild cherry with hawthorn, hazel, blackthorn, holly, and dog rose. Two thousand of these were planted by the local community during national tree week (1998). Public and management access are gained off Northwich Road and open onto approximately 2km of informal paths. However it is possible to access the site using public footpaths and that was the inspiration for this walk.