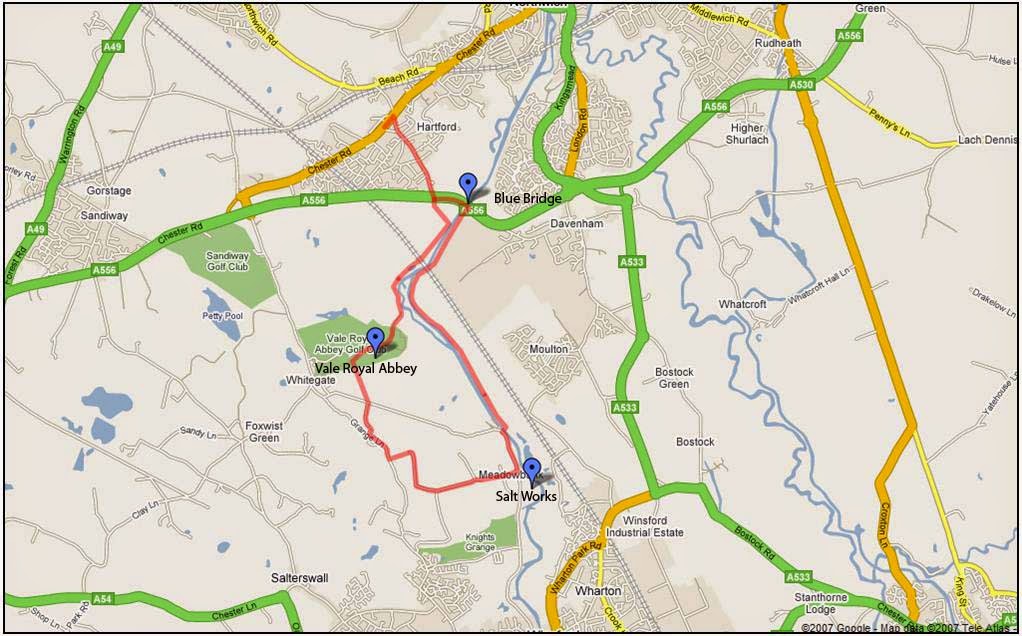 This interesting walk follows one bank of the River Weaver before going through the grounds of Vale Royal Abbey. It then crosses the Cheshire countryside before rejoining the river at the Winsford Salt Mine and returning to the village along the opposite bank.


● Starting from the centre of the village walk down School Lane towards the bypass.
● At the traffic lights cross directly over the bypass using the pedestrian crossing and go up some steps to signposted path.
● Cross the field to a kissing gate and then follow the path downwards to the left to reach another.
● Join the lane and turn right to follow the path of the river. You will pass under the railway viaduct and can notice on the right a tunnel under the embankment that was built to allow the movement of cattle (the tunnel and the viaduct are Listed Buildings).
● Follow the lane straight on, going through a pinch gate, until you reach another gate into the grounds of Vale Royal. Abbey.
● Enter the grounds and then walk along the road, passing the Abbey on your left.
● Once past the Abbey you will come to a row of new houses, opposite number 21 leave the road and follow the track branching off to your left that used to be the old driveway to the Abbey.
● Look out for a signposted footpath on your left, going over a stile and crossing a large field.
● At the far side of the field, near a wood, do not go through the wood but take a path angling slightly away from it across the field to its right. The path crosses the field to meet the road next to a house.
● Cross the road here and go up the road opposite towards Bark House Farm.
● Turn right after the house and join a track.
● Follow the track, looking out for a signposted path on the left with a stile next to a field gate (There was a large dead log here but it may get moved at some point so don’t rely on it!)
● Cross the stile and then follow the field boundary on your left (ignore the gate on your left).
● Cross a bridge and stile and walk past a garage along another track.
● Turn right along the track and follow it until you reach a road and a row of houses. You will be able to see the winding house of the Salt Mine as you approach it.
● At the main Winsford road turn left, crossing the road and walking past the Salt Mine.
● After the end of the mine’s lorry park look for steps on the right leading down to the River Weaver.
● Cross the river here and turn left on the far side to follow the path alongside the river—there are picnic benches here so it’s a convenient place for a break.
● Follow the river path past Vale Royal Locks and up to the Blue Bridge on the bypass.
● Climb up to the road and turn left to return to the end of School Lane and retrace your footsteps back to the start of the walk.

Winsford Rock Salt Mine was opened in 1844 and is the oldest operating mine in the UK. It is located 150 metres (over 500ft) below the Cheshire Plain and its naturally protective atmosphere stays at a constant 14C (56F) all year round with a humidity band of 60% - 70%. The Mine produces over a million tonnes of Rock Salt a year and this is primarily used for highway de-icing. The ‘Room and Pillar’ method of mining has formed a huge network of underground tunnels or roadways with an average height of 8 metres and a width of 20 metres. There are currently over 135 miles of tunnels but this grows daily. Mining is carried out using a Joy Continuous Miner –one of the largest single Drum Head Mining Machines operating anywhere in the World. In 1732 salt accounted for 79% of the cargo carried on the river Weaver.

As you approach the locks you can see the old course of the River Weaver diverging to the left over a weir. It was separated from the man-made navigable part of the river (Vale Royal Cut) when, between the 1730s and the end of the century, the river was straightened and locks built in order to allow the passage of larger commercial barges. The size of craft that could be accommodated can be judged by looking at the dual lock system that was built as you re-cross the river. At each level change there are a pair of locks—one larger and one smaller. In 1885 over 250 vessels were using the Weaver Navigation, carrying mainly salt and coal, with over 150 trips being made per day.

Founded in 1278 by King Edward I, the Cistercian Abbey took 53 years to build and was opened in 1330. The king laid the foundation stone on 13th August 1277 after promising to build the largest abbey in England for the Cistercian monks of Hereford after he survived a storm at sea returning from the Holy Land. The original Abbey was almost destroyed by a fierce storm in 1360 but was extensively rebuilt by the Black Prince and remained in use until 1539. It was largely demolished following the Reformation. At it’s height it was larger than Westminster Abbey. Following the Dissolution the site was acquired by the royal commissioner, Sir Thomas Holcroft, who ‘plucked down’ the great church. Afterwards he built a house which incorporated some of the monastic buildings. Evidence suggests that the plan focused around the conversion of the south and west ranges. Holcroft’s house, although much altered since the sixteenth century, can still be seen at Vale Royal today. It has recently been converted to provide a clubhouse and other facilities for a golf course. There are no visible remains of the church, although a monument known as the ‘Nun’s Grave’ marks the spot where the High Altar is thought to have been located.